The more of John McCain I hear the less I like.  John McCain likes to talk about leadership in the context of Commander in Chief.  He’s good in that context because of his service in the Navy and his time spent in a Vietnamese prison camp.  But leadership is much more than just ordering troops around.  In fact, the test of a true leader is whether or not people follow him when he CAN’T order them around at all.

We are suffering from a lack of leadership in America.  Both candidates of the two major parties are coming up with the same awful ideas to the most serious of situations regarding our economy since the Great Depression.  The problem is that they have failed to learn from the Great Depression.  I can understand why Barack Obama would want to give billions of dollars in taxpayer money to failing banks that mismanaged their own funds.  He’s a big government statist.  I expect that from him.

Government will be there for you... I promise

Republicans, however, are supposed to be the “conservative” party; the “free market” party.  And yet, the supposed head of the “free market” party is all in favor of a government bailout that most certainly will do more damage than good.  Not only do I believe it won’t help and will further damage our wounded economy, but it will establish a precedent that says, “When times get tough government will be there to bail you out.”  I picture Darrell Hammond as Bill Clinton when he says, “I’m bulletproof”.

John McCain is not leading on this issue and it’s going to cost him the election.  If McCain really were a maverick, he’d be out there dowsing the flames of this bailout with gasoline and rallying the Republicans around an economic plan that would actually work.  But he’s not a real maverick.  He’s only a maverick when it comes to issues when he differs from the Republican status quo.  His leadership is off-course at best and a complete farce at worst.

A true maverick would be espousing the belief that the market will adjust itself much more appropriately and quicker than any government program and that government intervention, as in the Great Depression, will only make things worse than they already will be.  A true maverick would be telling people that we’re in for some tough times but that it’s the right thing to do, just like he did with the Iraq war, only this time, it’d be with some real intelligence behind him.  A true maverick would not compromise the principles of free market economics and liberty to save his political skin.

If you want a true maverick, you’ve got the wrong candidate.  The one you want is here: 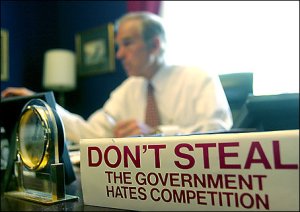 With the majority party conventions arriving the next two weeks, and with them endless promises of government “solutions” to America’s problems of security, energy, health care and economy, I’d like to begin by asking a simple question, “How important are those solutions to you, really?”

Barack Obama has said that his solution would provide health insurance for over 50 million uninsured in this country (many of whom are young people and illegal immigrants, but that’s besides the point) paid for by taxes.  He continually touts this as caring for the little guy.  Millions of people will probably vote for Obama in the upcoming election based primarily on this issue.  To those people I ask the question, “If there were no taxes coerced from the citizenry to pay for the health insurance of those 50 million would you donate money to charities to provide health insurance for them?“

If the answer is “yes” then I have to ask “why can’t we do that now?”  Instead of having the government forcibly steal from the citizenry to pay for these projects, why can’t private charities, which are much more efficient anyways, provide this service thru charitable donations?

If your answer is “no” then I can ascertain that you truly don’t care enough about those 50 million people to pay from your own pocket, but you’re ok with coercing that money from someone else.  Basically, you believe it’s ok to steal, as long as the government does it and for someone who “needs” it.  Or you simply believe, as I do, that each person is responsible for him or herself and nobody, especially the government, has a right to play Robin Hood on a grande (or any) scale.

So the question becomes, if all governmental spending questions were posed to the public in this way would taxation really be necessary?  If all the social programs were really in the public’s “best interest” wouldn’t the public donate money, in their own best interest and of their own volition, toward that end?  If the income tax was eliminated and your congressman came to your city and requested money for a subsidy to farmers in Idaho to grow corn for ethanol, would you donate money?

This is the fundamental question that all citizens and politicians should ask before supporting government programs that will commit even a dime of the tax payers hard earned money.  Sure everyone will play fast and loose with the purse strings when it’s someone elses dime, but when that dime is yours, how willing are you to part with it for the government to waste it?

You could ask the same question about the decision to go to war.  If taxes were eliminated, would all those in favor of the war in Iraq donate money to wage that war?  Wouldn’t that limit the probability of interfering in the affairs of sovereign nations?  How many of you would have donated money to fund the Vietnam War?  Korea?  Desert Storm?  We would certainly get a better picture of the public’s support for any particular conflict and the true political asperations of any politician.

If you aren’t willing to put your money where your mouth is, why should the rest of us foot the bill?

I had the misfortune of stumbling into listening to and watching the Democrat debate in South Carolina. I’ve been paying rather close attention to the Republican field, knowing that my choice would come from that side of the debate, but felt like I needed to find out what we were up against. And frankly, what I found scared me to death.

Here is a quote from John Edwards:

“…Ending poverty is the cause, the single most important cause in my life.”

The goal of ending poverty is most certainly a Democrat issue as John Edwards asserts. I hope it remains a Democrat issue. So how does a society go about ending poverty? Well, from what I can tell from listening to all of the Democratic candidates, it starts with penalizing those who have worked hard to reach a certain level of income by raising their taxes, whilst eliminating the taxes on those below the “poverty line”. In combination with penalizing the hard-working and successful “wealthy”, we must also arbitrarily force companies to raise the wages of the poor to what is commonly referred to as a “living wage”. Finally, we must use the revenues created from penalizing the wealthy to provide services for the poor which cannot be claimed by the wealthy who are paying for them.

So let me get this straight… They want to collect money from people solely because they can “afford it” to provide services for those who can’t afford them, such as healthcare, food, transportation, etc… and then force employers to raise their wages beyond what they are worth in a free market economy because it’s the right thing to do? As Hillary Clinton calls it, that’s “economic justice”. So what you’re saying, Senator Clinton, is that it is right for you to take money from someone just because he “has enough” and give it to someone else because they don’t have “enough”? Is the government trying to establish itself as the new-age Robin Hood?

Someone needs to give the Democrats an economics lesson. In a free market economy, goods and services are valued where they are most needed. So if people want more butter, the value of butter and milk will go up. When people don’t want butter, the value of butter and milk will decrease. If there is a need for engineers in the market place, the value of engineers goes up which, in turn, provides incentive for others to train to become engineers. This allows for the most efficient use of resources to meet the demand for engineers. If the value of engineers is kept artificially high because the government legislates that engineers must make a certain amount of dollars, this will provide incentive for workers to continue to train to be engineers even as the engineering jobs are all filled. This creates a large number of unemployed engineers.

Low paying jobs are low paying for a reason. Most low paying jobs are not in high demand and could be performed by anyone with certain mental and physical faculties. Because there are great number of unskilled workers, low paying jobs have an abundance of qualified prospects compared with jobs for highly skilled jobs, such as nuclear physicists. Because there are few people capable of understanding nuclear physics, the demand and thus the compensation for nuclear physicists would be much greater than, say, a check-out clerk at Wal-mart. If companies are forced to pay a clerk at Wal-mart $15 an hour, it would be more cost efficient for them to find a way to eliminate the need for clerks, than to pay all of the clerks an inflated wage. Now you’re dealing with even more unemployment. This isn’t rocket science. If you’d like a greater understanding of government’s impact on a free market economy, you should read Thomas Sowell’s “Basic Economics: A Citizen’s Guide to the Economy”

The goal of ending poverty is not a new one. It was also carried by another political party from the past (and present), the Socialist party. The Socialist Party believes that poverty is rooted in Capitalism, as is racism and war. Socialists believe that all inequality is a result of the economic system of capitalism, in which those who have prey on those who don’t.

The belief that poverty can be eradicated by government is a fantasy. Even Jesus recognized this when he said, “the poor will always be with you…” (Matthew 26:11) While poverty is a tragic state, it certainly is not the worst of fates either. Sometimes not having money is the source of some of the greatest personal victory stories in history (If you don’t believe me, watch “The Pursuit of Happyness”) The Capitalist economic system has done more to eliminate poverty than all the government programs in the world.

Here are a few more points which should sound eerily familiar:

These are the Democrat talking points on the economy. They should sound familiar and should scare Democrat supports because I copied them verbatim from the website of the Socialist Party of America. With few exceptions the Democrats side more often with the Socialists than they do with the Founding Fathers. If any of the Democrat candidates is elected, we will be well on our way to becoming the United Socialist States of America…

Next up: Why I Can’t Vote for Mike Huckabee